The site of Mr. Baker's "glass house" turns out be the location of a big hole in the ground, intended, we think, for a Jewish senior housing development, right across 37th Street from the Latter Day Saints church, just east of Long Beach Boulevard. Perhaps not coincidentally, the location is also close to the Petroleum Club, where for decades South Coast Orchid Society held its annual banquet and installation of officers each January. Of the lovely Claire Hammel, we haven't learned anything further, but we expect to spend some time on the internet searching digitized newpapers and Long Beach history sources. We were lucky to have such an effective orchid spokesmodel. 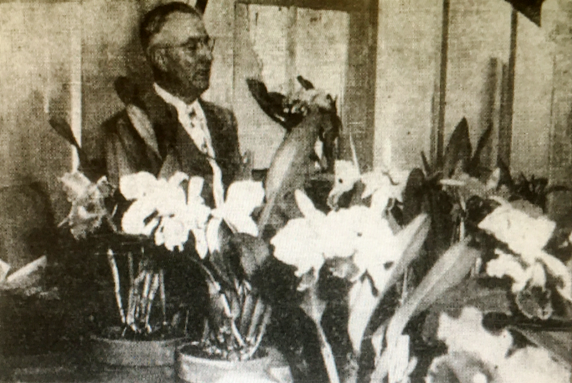 Caption for the photo of our first President, Paul N. Baker, from The Independent: BAKER’S BLOSSOMS—Oil and orchids are beautifully blended by Paul N. Baker, Long Beach oil man, who lives at 424 Winslow Ave. Adjoining his place of business at 370 E. 37th St. he has a glass house where as a hobby he raises spectacularly beautiful orchids. He is shown here surrounded by a few of his choicest specimens. He is president of the South Coast Orchid Society. Mrs. Baker shares her husband’s enthusiasm and wins awards for her orchid corsages. (Independent Photo by Fred Wilson.)

More about our first spokesmodel: Born Claire Leonard in 1914 in Seattle, Mrs. Claire L. Hammel had worked as a model in Portland, Oregon. She and her first husband Alvin M. Hammel were active in a civic theater group in Portland in January, 1938, in the cast of Idiot's Delight, a popular comedy by Robert E. Sherwood. They were parents of two children born in 1940 and 1944. Claire was interviewed in a Portland newspaper about being a "working girl" while being a housewife and raising two children. By 1950, Claire was in Long Beach. We don't know what became of Mr. Hammel, but in 1957 she married a second time, in Las Vegas, to Cpt. Charles Stanford ("Stan") Vose. He had served in World War II and continued in his military career. His children spent some of their school years in Seville, Spain during his overseas assignments. By the 1980's, Stan and Claire were at Ft. Bliss, El Paso, Texas, and she worked as an artist there for many years. She died in 2000. Her tombstone bears the inscription "Forever Beautiful".

More about our first president: Paul Noble Baker was born in 1892 in El Modena, California. He served in the Navy during World War I. He and his first wife Muriel W. Sheldon adopted two children. They lived in Long Beach at least as early as 1930. His second wife was Maude Audry Daume. They were married in 1941. They had several children. During World War II they lived on Winslow Ave. in Long Beach, and Paul owned Shasta Petroleum Company, offices at 370 E. 37th Street. He died in 1961. His widow Audry, whose skill at making orchid corsages was one of the things that got our society started, eventually relocated to Arkansas, where she died in 1997. Some of their children are still living. As always, we would love to know more about our founding members! 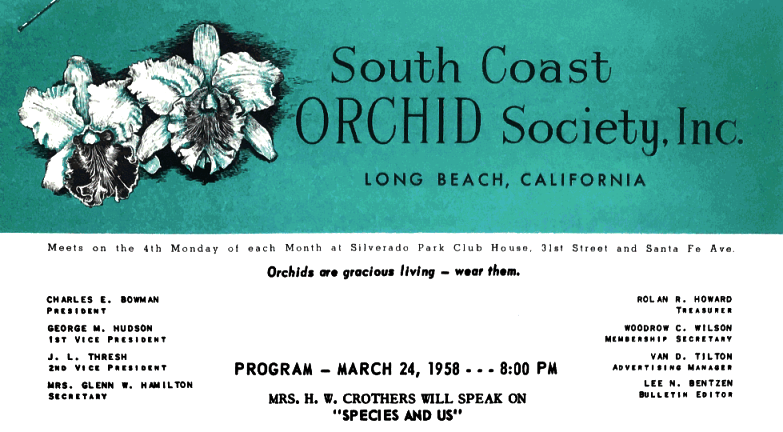 Recently our friend Brandon Tam discovered a trove of SCOS newsletters in the "orchid archive" at The Huntington Botanical Center. Armed with our little iPhone, we spent a morning with Brandon in the basement of the Botanical Center and photographed them. They have now been converted to pdf format and are included in the Newspapers link on this web site. We were surprised to spot this motto on the newsletters from the 1950's and 60's: Orchids are gracious living — wear them. 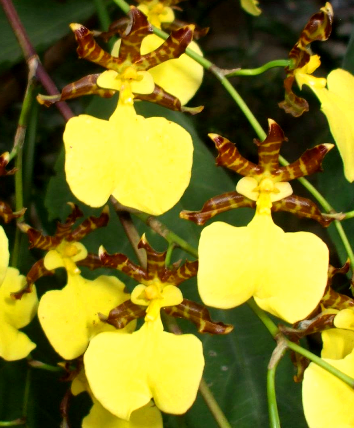 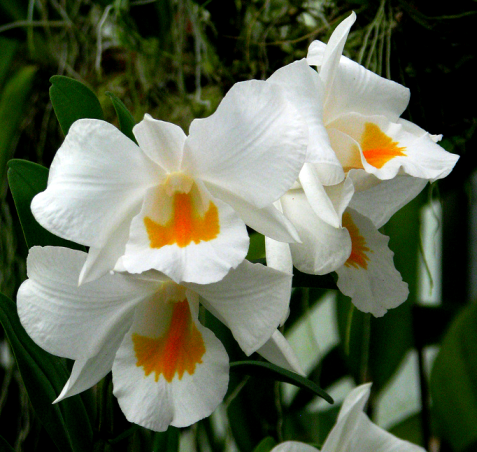 A quick trip to the internet shows that orchid corsages aren't what they used to be. The popular flowers now are Cymbidium, Dendrobium, and Phalaenopsis, especially the lurid, dye-infused "blue" ones. We suspect the lovely Claire Hammel, Mrs. Baker, and all the rest of the founding members of South Coast Orchid Society had better taste — and they knew how to wear their flowers!

We are grateful to Art Chadwick of Chadwick & Son Orchids, Inc. for some pictures of Cattleya corsages done right. The archives are full of pictures of American First Ladies on inauguration day, but as that happens in January, everyone is shown wearing bulky coats and, usually, furs. The pictures usually don't reveal very much about the orchids, either, except that they were numerous! Perhaps more interesting is the picture of modern corsages in the style favored by First Lady Edith Wilson, proving it can still be done, and in good taste. 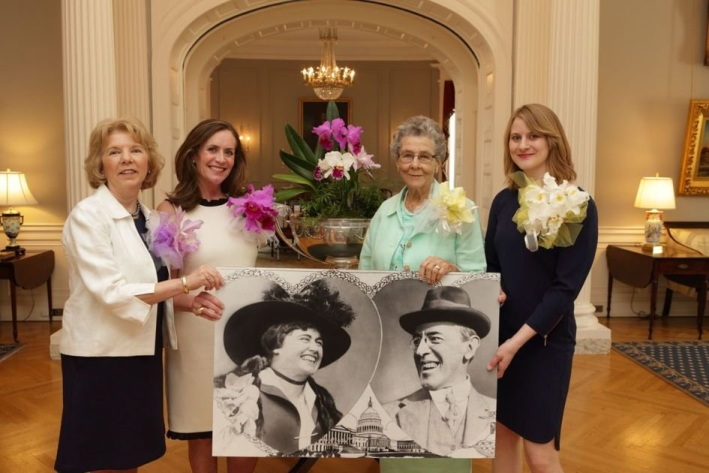 But we saved the best for last: the "travel corsage" fashion plate from the 1940's is definitely high style. The corsage uses the very best quality of Cattleya hybrids and complements the ensemble. We're not so sure about the minks draped around the model's neck, though, complete with their little heads, claws, and toothy grins. When you were very young, and some big-city aunt visited you wearing one of these little varmints, didn't it creep you out? Where was the model supposed to be traveling from? Maybe a weekend at a hunting lodge? Are you sure there isn't a shotgun hiding somewhere in the picture? 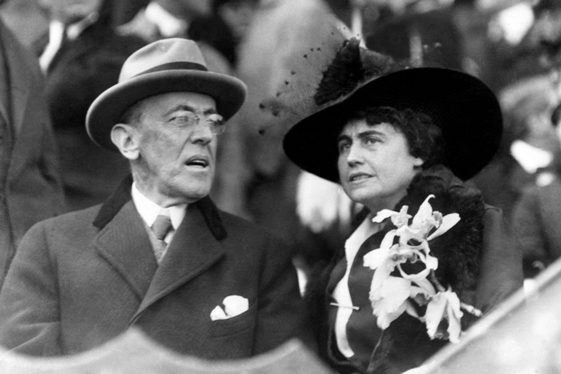 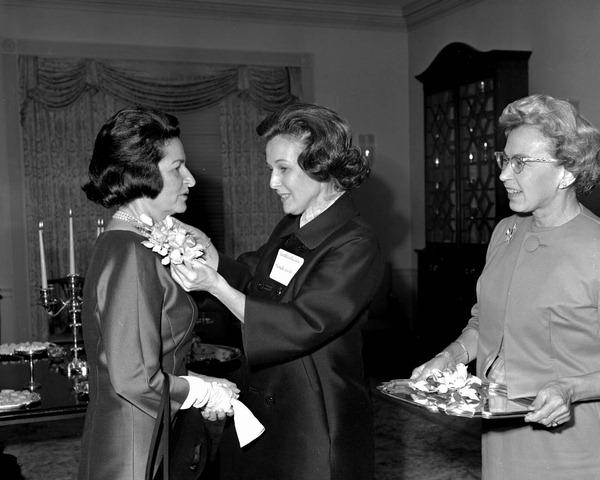 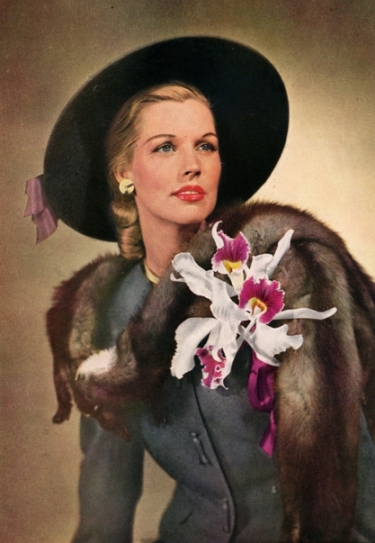