South Coast Orchid Society, Inc. is a tax-exempt 501(c)(5) organization promoting the cultivation, appreciation, and conservation of orchids. We were founded in 1950 by local orchid hobbyists and growers. We are an affiliated society of the American Orchid Society (AOS) and of The Orchid Digest Corporation (from October 11, 1953 to the present). Our main activities, including our monthly meetings and our annual auction, are open to the public. For information about donations, please contact us! 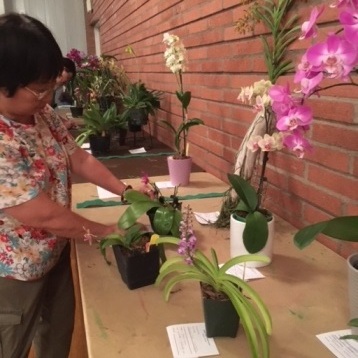 We meet monthly, usually on the fourth Monday of the month, unless there is a conflict due to holidays or inavailability of the meeting hall, at Whaley Park, 5620 Atherton Street, in Long Beach, California. The program presented by our featured speaker begins at 7:30 pm — see the current newsletter for details! However, one of the highlights of our meetings, and a good reason to arrive by 7:00 pm, is the astonishing assortment of blooming plants that our members bring for informal ribbon judging. Most of these plants have been grown outdoors by our members! In addition, there is usually a silent auction for a few selected plants, and, at the end of the meeting, a raffle for plants donated by vendors or individuals to benefit the society. One of the best ways to learn about orchids is to spend some time examining the plants at our meetings, and discussing them with other members.

For more information on topics that have been discussed in our meetings, see our new blog, Orchids Today and Yesterday. We are also looking for pictures of our meetings, past and present, as well as any stories, newspaper clippings, etc. that you may have collected, for possible use on our web site and other publicity activities. Please contact the web master. 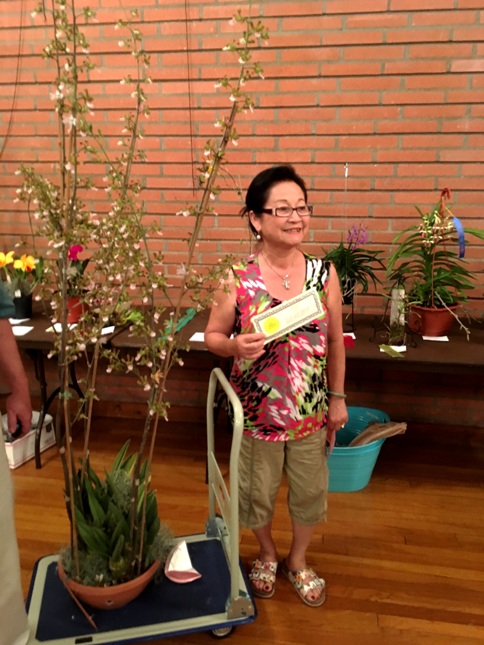 Agnes and her award-winning Eulophia

In conjunction with our meetings, the society also hosts a formal judging center under the auspices of the American Orchid Society. The AOS judging program recognizes orchid plants of exceptional merit. Plants are brought in for judging by some of the best growers in our area, amateurs as well as professionals. The judging center is open for visitors, an excellent opportunity to see what judging is all about, and also an opportunity to see some truly exceptional plants. 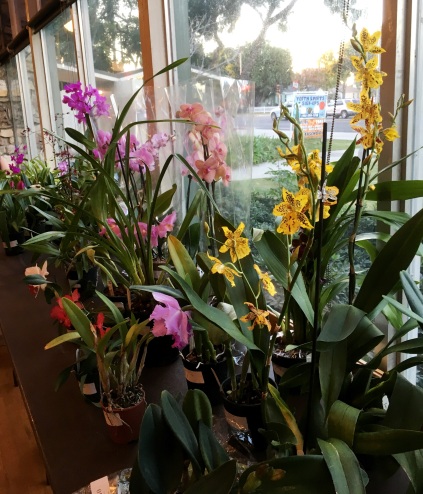 Plants lined up for 2017 auction

Every October, we devote our meeting to our annual auction, our main fund-raising event of the year. The proceeds from the auction help us pay for the activities of the society, such as the rent for the meeting hall (including the AOS judging center) and fees for speakers. The annual auction usually includes hundreds of plants of many types, donated by local vendors and individuals, most of them suitable for growing at home. Among the plants being auctioned, there are often divisions of very desirable species and hybrids that are not usually available at nurseries.

Please see our separate web page about the SCOS 2018 Annual Auction for the latest information.

We recovered the names of our past presidents from old newsletters and the few surviving membership rosters. We honor our predecessors for their care in creating a legacy of service to everyone who enjoys orchids today. Little by little, more details of their lives and times have been discovered.

At first, it seemed we would end up with a list of people interested in orchids. However, as we dug deeper, the story took some unanticipated turns. Our presidents, like the still poorly-known roster of our past members, came from many different backgrounds. There were veterans of numerous wars, engineers and pilots in the thriving aviation industry of Southern California, oil men, doctors, veterinarians, software engineers, salesmen, people from the entertainment industry, the horticulture and agriculture industries, entrepreneurs... in short, representatives of every sort of Southern California story. They were affected, too, by all of the usual Southern California challenges: traffic, real estate prices, freeways, shopping malls, parking lots, and above all, the constant threat that "development" would overrun and obliterate all the things that made their lives enjoyable. Somehow, each generation has adapted. Our presidents succeeded in their mission: we still have our orchids!